End of the First Quarter: What’s the Score?

The weather’s cooling down, but the football is heating up! In this issue, we will unpack news in sports and the effect of COVID-19 to the start of the football season.
Grab your coffee, take a seat, and enjoy your Friday as you read through this week’s MELT Newsletter.

In this week’s issue:

MELT U PODCASTS THIS WEEK

Catch up on all of the MELT U Podcasts here – new podcasts posted bi-weekly on Spotify and iTunes! 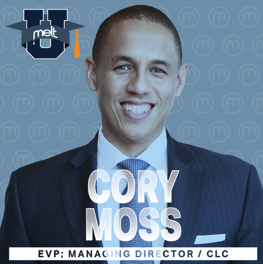 MELT U Episode #52: Cory Moss joined CLC in 1995 and been instrumental in growing the company’s licensing business. Cory was a previous member of the NCAA Football Marketing Committee and NCAA Youth Football Committee. He was named to Sports Business Journal’s first-ever Power Player Leaders Behind the Scenes in College Sports list in 2019 and a recipient of Atlanta Business Chronicle’s Up and Comers 40 Under 40 Award in 2009.
Follow him on Twitter @CZMOSS LISTEN HERE 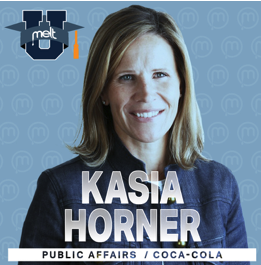 MELT U Episode #53: Kasia Horner is a Director in the Public Affairs and Communications function at The Coca-Cola Company. In her more than 16-year career with The Coca-Cola Company, Kasia has lead sports marketing activation for National Collegiate Athletic Association (NCAA). Kasia set strategic direction, managed key college sports partnerships with the NCAA, Turner Sports, and CBS and led the execution of the NCAA March Madness sports marketing campaign. Kasia is a graduate of Williams College and holds an MBA from Dartmouth College. LISTEN HERE

Coming this October on the MELT U Podcast series… 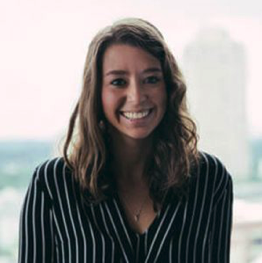 This week’s MELT U Alumni Spotlight features Sydney Warren, MELT U intern class of 2017. Sydney graduated from Middlebury College and now works as an Audio & Podcasting Coordinator for ViacomCBS.

Subscribe to MELT U and you too will be on your way to becoming another #MELTU Success Story!

Expand your horizons with our curated collection of helpful articles, videos, and other essential recommendations.

Women In Sports: Sports Illustrated unveils The Unrelenting, its list of the most powerful and influential women in sports. As the only five female ADs at Power 5 schools, Washington AD Cohen, Penn State AD Barbour, Virginia AD Williams, Pittsburgh AD Lyke and Vanderbilt AD Lee made the list as one, and SI observes: “Although the percentage of female athletic directors has increased from 19% in 2009 to 24% in 2019, according to an annual report from Women Leaders in College Sports, most hires have come at the Division II and III levels, leaving this small group to represent women at the top ranks of college sports.” READ MORE.

NIL: SBJ dives into the fact that “Name, image and likeness legislation has passed for athletes who play at one of the 252 colleges or universities in the NAIA, making it the first national athletic association to approve NIL rights. The new rules, which make it permissible for athletes to make money from their own rights, go into effect immediately. Longtime NAIA President & CEO Jim Carr said that more than 90% of the association’s full membership voted to approve the new NIL rules.” READ MORE

Football Ratings: Sportico states “In the season’s first meeting between two Top 10 opponents, the No. 4 Bulldogs limited the No. 7 Tigers to a pair of field goals in a 27-6 victory that averaged 4.22M viewers and a 2.2 rating. To date, that Oct. 3 telecast ranks fourth on the year, sandwiched between NBC’s afternoon Duke-Notre Dame broadcast on Sept. 12 (4.32 viewers, 2.4 rating) and ABC’s all-ACC Saturday Night Football presentation featuring Miami and Louisville (3.80M viewers, 2.1 rating, Sept. 19).” READ MORE 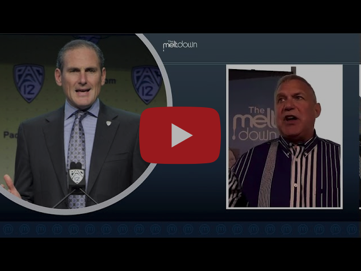 The MeltDown Ep. 11:
Join us as Vince Thompson breaks down the start of the College Football season and the current standing of the NCAA with Michael Smith.

VINCE LECTURING AT A CAMPUS NEAR YOU!

Vince and virtual MELT U are heading to a campus near you soon!

Book a live or virtual keynote or training session with Vince Thompson, MELT Founder and CEO! Hear from Vince on a variety of topics such as career development skills, student-athlete branding, collegiate sports marketing, and more! LEARN MORE

Looking To Land Your First Job After College? Start Here

You’re going to college to get a good job. The problem is, there’s no class on How to Get A Job in college. And in today’s job market, making that leap from student to employee is going to be more challenging than ever.
That’s where this book comes in.
Build Brand You: Insights For Pursuing Your Dreams is a step-by-step guide to building the network, the résumé, and?most importantly?the mindset you need to stand out from the competition and win the job you want. Pre-order your copy now!! 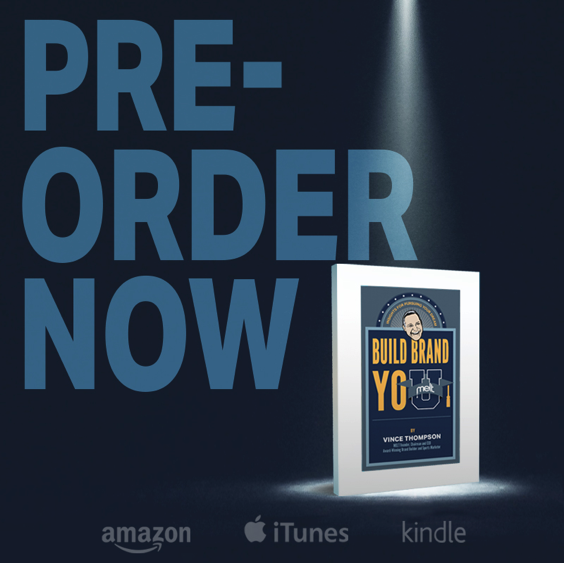 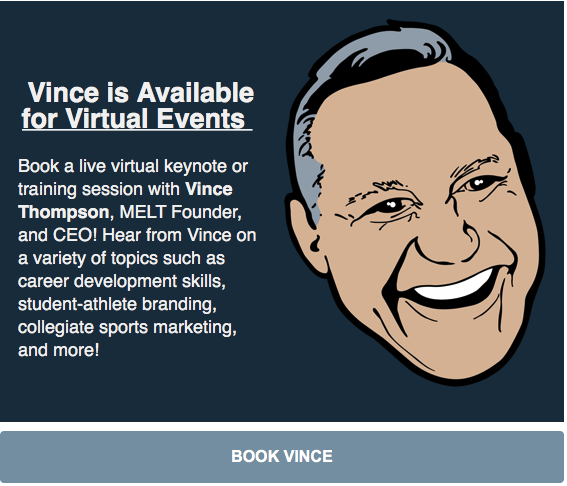 It’s a high-powered sports marketing agency that’s based in Atlanta and works with the world’s biggest brands, teams, and events. MELT, which I founded in 2000, has become one of the nation’s leading sports marketing agencies, including a 20-year representation of The Coca-Cola Company, the activation of 17 (would have been 18) consecutive Final Fours, seven seasons of ESPN College GameDay, AFLAC’s sponsorship of The Southeastern Conference (SEC) and much more. We have won a collective 20 industry awards since 2017, including CEO of The Year, Event Marketer IT list of Top 100 Event Marketing Agencies, Chief Marketer’s Top 200 agencies, and many more. MELT and I sit in a unique position in the sports and college sports marketplace, offering insight into the significant business issues in sports and college sports.

What’s MELT U?
It’s a one-of-a-kind virtual internship program offering a once-in-a-lifetime opportunity to explore the world of sports marketing. This Summer MELT U educated 1,100 students with 50 podcasts of industry leaders, live Lunch & Learns from my upcoming book, “Build Brand YOU.”  MELT U will now extend the offerings to be year-round and to include newsletters, video series, seminars, student-athlete branding, and much more.