MELT, the Atlanta-based, award-winning sports, entertainment, culinary, lifestyle, and esports marketing agency is honored to be named the Bronze Stevie Award Winner in the 2019 American Business Awards for Company of the Year – Advertising, Marketing & Public Relations. The 17th Annual American Business Awards are a prestigious honor and MELT is excited to add yet another award to its long list of successes and accolades. Stevie winners will be presented their awards on June 11 in New York

The American Business Awards are the U.S.A.’s premier business awards program. All organizations operating in the U.S.A. are eligible to submit nominations – public and private, for-profit and non-profit, large and small.

Nicknamed the Stevies for the Greek word meaning “crowned,” the awards will be presented to winners at a gala ceremony at the Marriott Marquis Hotel in New York on Tuesday, June 11. Tickets are now on sale.

The entry captured the essence of MELT’s company culture and client relationships. Led by CEO / Founder Vince Thompson, MELT had one of its most successful years in 2018. Winning numerous marketing industry awards with current clients like The Coca-Cola Company and Intercontinental Hotels Group was just the beginning. MELT began work with numerous new clients this past year, including Avid Hotels, BODYARMOR Sports Drink, Fellaship Cigar Club, and Wingstop.

Some of the chief accomplishments of MELT were highlighted in the entry as follows: 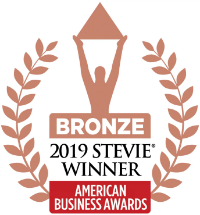 MELT continues a hot-streak in the marketing industry and industry awards as this is their 13th award or nomination since 2017 including:

More than 200 professionals worldwide participated in the judging process to select this year’s Stevie Award winners.

“The nominations submitted to The 2019 American Business Awards were outstanding. They illustrate the continued vibrancy of innovation and high level of achievement across the American economic landscape,” said Michael Gallagher, president and founder of the Stevie Awards.

“I’m so proud of our MELT team and all the great projects that we continue to work on with our clients,” said Thompson. “Our teams continue to shine and do tremendous thinking, work, and execution.”

Details about The American Business Awards and the list of 2019 Stevie winners are available at www.StevieAwards.com/ABA.